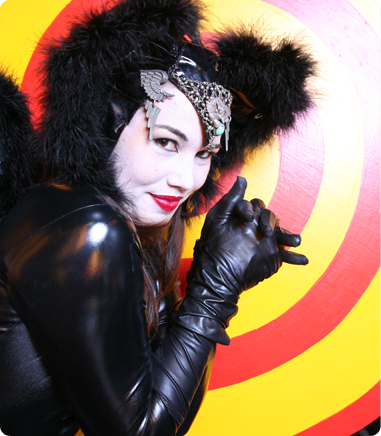 Watch never before seen footage of this highly creative show!
“The IONA dancers bring the cryptic oracle to life — offering insight, infused with symbolism, playfulness, and mystery.” The Honolulu Advertiser

IONA's E Season launched on May 3, 2013 with the presentation of their popular 2007 production, ‘The Living Tarot’ as a virtual theatre on the World Wide Web.

This hallmark show was originally created and performed in a Victorian house in Nu’uanu, in which 10 rooms were transformed into mini theaters each designed as a 3-D contemporary tarot card, embodied by a central dancer/character.

And the cards have come to life again - virtually!

Audiences of the original production interacted with the IONA dancers as they spun The Wheel of Fortune; visited The Devil, with his wings made of heavy chain; watched The Lovers intertwine in an aerial dance; circled The World's bamboo structure atop a rug of living grass; and were fed pastries in the kitchen by The High Priestess, who, in a specially written piece by Victoria Kneubuhl, delivered spiritual lessons based on feminine principles.

Whether you fell in love with the production the first time and want to relive the memory once again, or have only heard of the acclaim and are excited to finally indulge yourself and experience it the first time, the cards are coming to life once again - virtually, as the opening show of IONA’s new E Season.