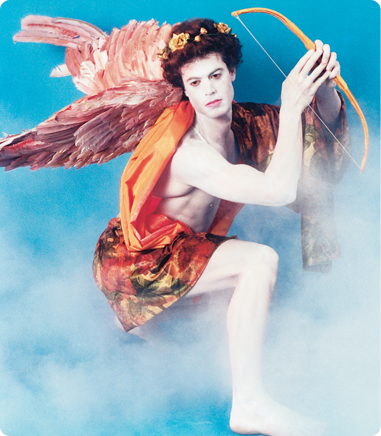 THE MYTHOLOGY
OF ANGELS
“Flaharty and her 10-member troupe did not disappoint. For 90 minutes they delivered a strange, sumptuous vision of angels from around the world that earned standing ovations...” Honolulu Advertiser

”The choreographer who makes such a convincing case for angels has taught her dancers how to move with incredible lightness of being at their core: they glide, float, meld into forms with a sense of timelessness that utilizes butoh’s emphasis on spontaneity” The Honolulu Weekly

One of IONA’S signature pieces, ‘The Mythology of Angels’ is an evening-length suite in six sections exploring divine guardianship, the tensions between good and evil, and the veil between body and soul. The rich heritage of angelic lore worldwide is depicted in brilliant color, culminating in a dazzling portrait of the extraterrestrial as metaphor for the 21st-century angel. Brilliant and heart warming, ‘The Mythology of Angels’ has been presented annually in Hawaii and has toured to several west coast cities.

Hawaiian Myths & Legends
MAIN STAGE
” . . . the performance illustrates a universal spirituality that is very Hawaiian; you feel the awe.” The Hawaiian News

The Mythology of Angels
MAIN STAGE
"A strange, sumptuous vision of angels from around the world that earned standing ovations...” Honolulu Advertiser